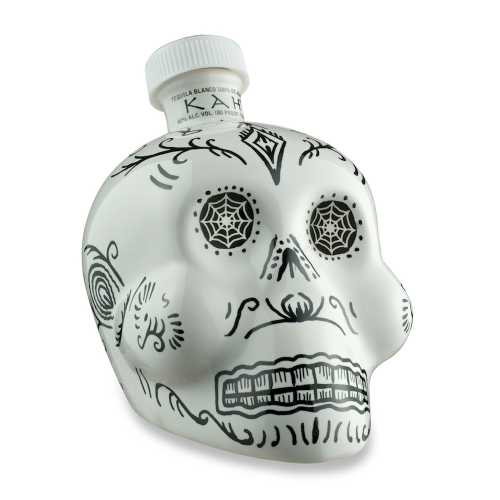 KAH Tequila Blanco contains intense sweet notes of the cooked agave, followed by a spicy white peppery punch. It is silky and delicate, leaving a sachet of spices on the palate. The KAH Tequila Blanco bottle was inspired by traditional Calaveras (skulls made from sugar) which are used in Day of the Dead rituals to symbolize death and rebirth. Sugar skulls are given to family still living and they are invited to "eat their own death", to acknowledge the belief that death is nothing but the passing from this life into the next. Bolivians celebrate their version of the Day of the Dead by keeping the skulls of their loved ones, calling it the "Day of the Skulls". These decaying heads are brought out each year on November 8th and taken to the cemetery where Bolivians feed them, give them cigarettes and Tequila. Keeping and entertaining the skulls of their deceased is seen as a way for the dead to be immortalized. They believe the skulls of their ancestors protect the living by warding off evil spirits. KAH Tequila was designed to pay reverence and honor to Mexico and its people. Its bottle and spirit are reflective of Day of the Dead, the 3,000 year-old Meso-American ritual honoring deceased loved ones. KAH's unique packaging, in turn, is inspired by traditional Calaveras used in Dia de los Muertos rituals to symbolize death and rebirth. The word KAH translates to "life" in the ancient Mayan language. Every bottle is an individual, hand-crafted work of art, not two bottles are the same. While the bottle captures that enduring spirit, so does the Tequila inside, as KAH's distillers transform hand-selected 100% Blue agave into lively Blanco, Reposado and Añejo varieties that are both certified organic and Kosher.